Campaigns and Dynamic Audio Insertion (DAI)Transistor offers dynamic audio insertion (DAI) for podcasts. This allows podcasters to automatically insert ads, audio clips, or announcements at the beginning, middle, or end of their episodes.To get started visit the Campaign tab of your podcast where you can add dynamic notes, upload audio snippets, and create a campaign.Default CampaignYou can assign a default campaign to your show which will apply to all episodes not directly assigned. If you don't have any complex needs, this is the easiest way to get started with campaigns. Just create a campaign, make it the default, and all episodes will reflect this campaign, including newly released episodes!Publishing CampaignsIf you've been using campaigns for a while you'll notice this change. Clicking "Save and publish campaign" will add the campaign to the assigned episodes. This will let you set up your episodes prior to a campaign launch and turn it on when you're ready.Excluding Episodes from CampaignsIf you don't want a particular episode to get assigned to a campaign, even the default, you can set the campaign in your episode settings to "None." MidrollsEvery episode is unique, and you'll need to decide where your mid-rolls go if you want to add any. To add mid-roll locations to an episode:Go to your "Episodes" menuClick on an episode to edit itClick "Ad locations" in the top navigationListen to your episode and find the spot(s) where you'd like your mid-rolls to appearClick the "+" icon to add the desired timestampYou can add as many mid-rolls as you'd like, and preview how it'll sound when an ad is inserted. 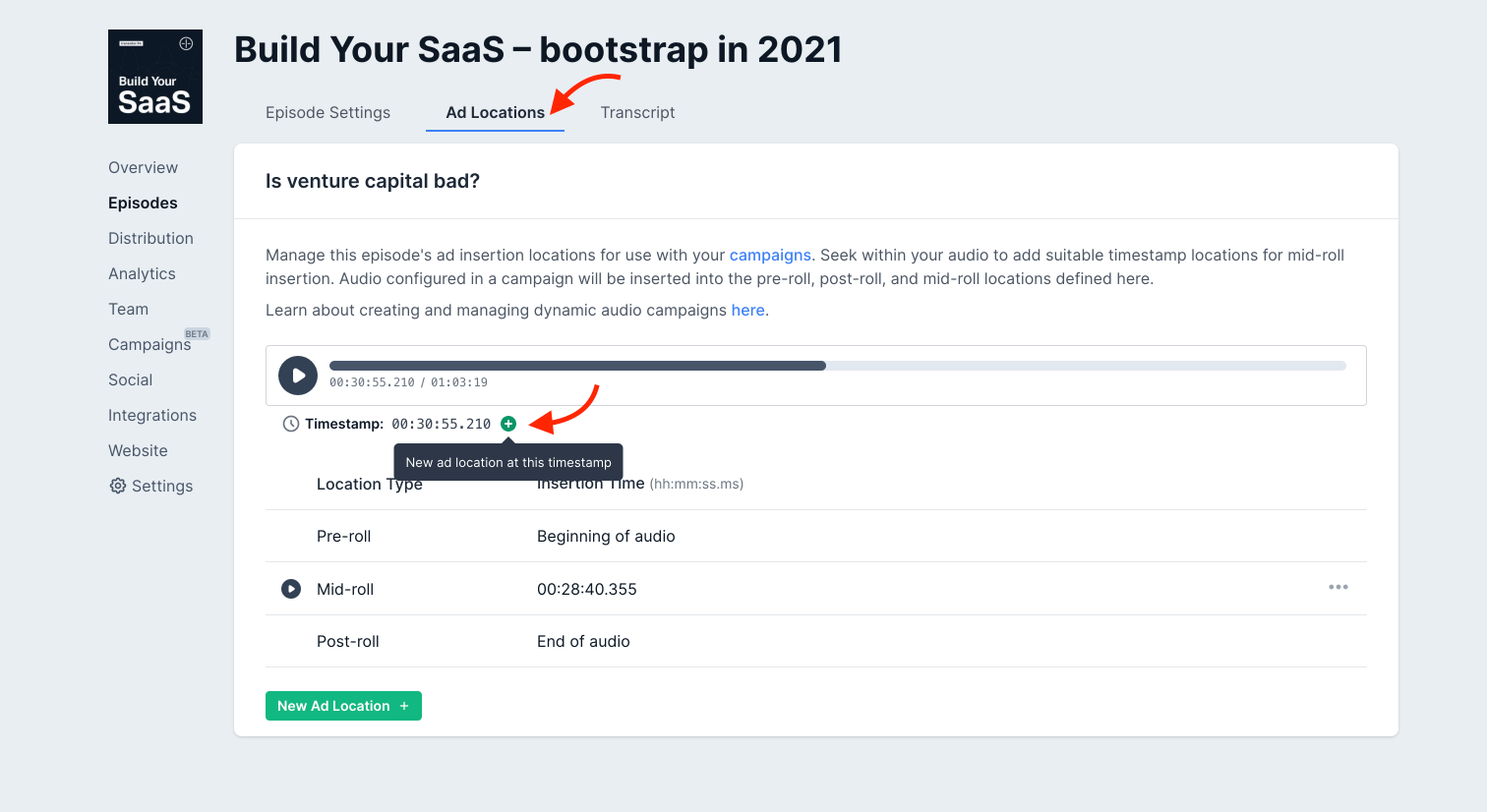 After you've created your mid-roll insertion points in your episodes, you can enable a mid-roll campaign:Go to your "Campaign" menuChoose an existing campaign (or create a new one)Select the ad you'd like to run in the mid-roll slot(s) 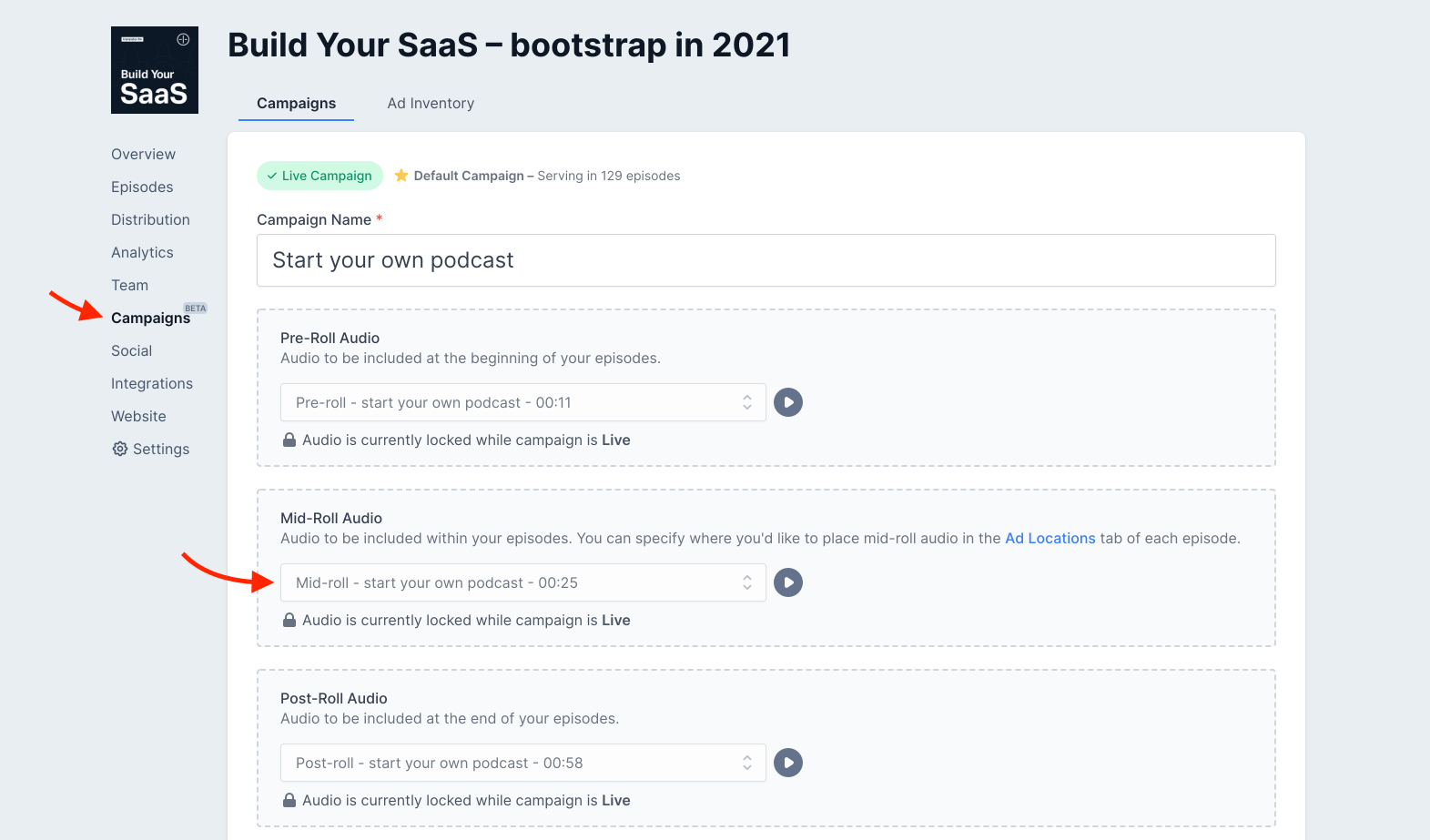 Don't worry if your campaign has more/less mid-roll ads than an episode. When the campaign is applied it will try and fill the spots that it can and happily move on when it's filled all the ad locations or run out of ads. You'll also be able to update an episode's ad locations later and you'll be prompted to re-process the audio with your new setup.ChaptersIf your uploaded audio file has chapter data embedded, don't worry! Transistor will retain and adjust the timestamps according to the new dynamic audio layout. The start times for each chapter will continue to match the content as intended.Frequently asked questionsDo ad campaigns get applied to episodes pushed to YouTube?Campaign ads are not pushed to YouTube, only the original audio is pushed to YouTube.Updating a YouTube video would clear the views and likes. So we only publish episodes to YouTube once using the original audio.If we included the ads they would not be removable from the video. If you updated your campaign, the old ads would still be in the YouTube video.What plan do I need to be on to use Dynamic Ad Insertion?If you're on the Starter plan and would like to upgrade to use this feature, you can do that directly in your account here! https://dashboard.transistor.fm/account/subscription/editLet us know if you'd like some help or share your thoughts on Live Chat or via email support@transistor.fm

Was this article helpful?